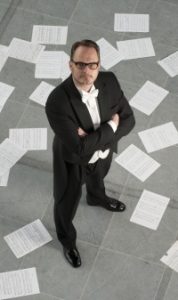 Christian Juslin was born in Åland, Finland. He began his music studies at the department of Church Music at the Sibelius Academy and graduated as a voice major. He studied opera singing with Björn Blomqvist, Peter Lindroos and Jorma Hynninen. He has also participated in master classes with Jeffrey Goldberg in New York and Bruno Pola in Italy.

Christian Juslin made his opera debut in Stockholm in 2000, appearing in the role of Alfredo in La Traviata at Folkoperan. Then followed engagements for roles such as Macduff (Macbeth) and Cavaradossi (Tosca).

Prior to his opera career Christian Juslin has worked as a highly versatile musician. He was employed as church organist and choir and orchestra conductor both in Finland and the Nordic countries, conducting works such as Mozart’s Requiem and Lars-Erik Larsson’s Förklädd Gud (Disguised God).

Christian Juslin is often hired as a concert and oratorio soloist for works such as Haydn’s Schöpfung, Beethoven’s 9th Symphony, Pärt’s St John Passion, Handel’s Messiah, Mozart’s Requiem, Coronation Mass and Mass in C minor, Saint-Saëns’s Christmas Oratorio and Verdi’s Requiem. Memorable performances include being a soloist in the Ylioppilaskunnan Laulajat choir during their celebrated tour to China and Singapore in 2006. Not only has he worked as a concert singer in all the Nordic countries, but also in Singapore, China, Italy, Germany, Austria, Iceland, Sweden and Norway.

Among recent and upcoming engagements to be mentioned are Pinkerton in Stockholm, Cavaradossi in Estonia, Edmund in Reimann’s LEAR in Malmö, Cavaradossi and Florestan in Bonn, Don Carlo in Chemnitz, Shuisky in Boris Godunov at the Savonlinna Festival, Otello in Chemnitz, Hungary (with José Cura conducting) and Schwerin, Erik in Helsinki and Cavaradossi in Tulsa, USA.