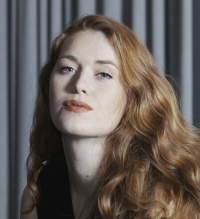 Swedish lyric dramatic soprano, Cornelia Beskow, has been described as “one of the most interesting young sopranos of our time“ (Bachtrack) with a “voice of dramatic depth, radiant top notes and distinctive, spellbinding timbre.” (Berlinske).
Winner of the 2017 Lauritz Melchior International Singing Competition, where she was awarded all four prizes, Cornelia Beskow trained at the Copenhagen Opera Academy (Soloist Class, 2009 – 2012) and the Stockholm University of the Arts (Masters Degree in Opera 2013 –2015). She made her Swedish debut at the Stockholm Royal Opera as Donna Elvira in Don Giovanni (2015) and her international debut at the Wiener Staatsoper as Elsa in Lohengrin (2020).
This season Cornelia performs the title role of Jenůfa in a new production by Keith Warner at the Oslo Opera and Senta in Der fliegende Holländer at Norway’s largest and most spectacular outdoor stage, Opera Østfold at Fredrikstens Festning.
Cornelia Beskow made her professional debut in 2012 as the Fox in The Cunning Little Vixen at the Royal Danish Theater in Copenhagen. On the same stage she continued to gain experience, by performing roles such as Annina in La Traviata (2012), Axinja in Lady Macbeth of Mtsensk (2014), Marianne Leitmetzerin in Das Rosenkavalier (2015), Der Hüter der Schwelle in Die Frau ohne Schatten (2015) and Sister Rose in Dead Man Walking (2017).
In Sweden Cornelia Beskow made her debut at the Royal Opera in Stockholm as Donna Elvira in Don Giovanni (2015) which was followed by her breakthrough as Sieglinde in Die Walküre (2017), performing alongside Nina Stemme’s Brünnhilde. In 2018 Cornelia performed in the Royal Swedish Opera anniversary tribute concert for Birgit Nilsson’s 100th birthday (also broadcast via OperaVision) and made her debuts as Chrysothemis in Elektra and Tatjana in Eugen Onegin. She has also sung Wellgunde in Das Rheingold in Dalhalla (2012) and Senta in Der fliegende Holländer at Malmö Opera (2019).
In January 2020 Cornelia Beskow made her international debut as Elsa in Lohengrin at the Wiener Staatsoper, singing alongside tenors Klaus Florian Vogt and Piotr Beczala. The Wiener Zeitung wrote “The young Swede has a remarkable voice with a strong, pithy pitch, powerful stamina and lyrical sweetness. She Photo credit: Petra Teeuwsen managed to create a credible portrayal of the role, between dreaminess and trepidation.” In the same year Cornelia sang the title role in Lady Macbeth of Mtsensk at the Hessische Staatstheater, in a short run before the opera house was
closed due to Covid.
In addition to a flourishing career on the opera stage, Cornelia Beskow sings regularly in recital and concert, with repertoire ranging from Wagner’s Wesendonck Lieder and Mahler’s Rückert Lieder to songs by Sibelius, Rangström, and Gösta Nyström. She has performed as soloist with the Royal Danish Orchestra in Beethoven Symphony No. 9 (2020) and in duet with Sir Bryn Terfel in a programme of Wagner, Dvořák and Gershwin, together with the Aalborg Symphony Orchestra (2021). Cornelia Beskow was awarded the Royal Swedish Opera’s Anders Wall Scholarship for her debut as Sieglinde in Die Walküre (2017). She has also received the Swedish Wagner Society’s Bayreuth Scholarship (2013), Barbro Salén Scholarship (2015), Danish Reumert Talent Prize (2015) and several scholarships from the Royal Swedish Academy of Music.