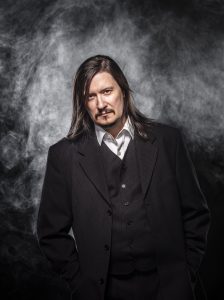 Daniel Frank made his operatic debut as John Sorel in Menottis The Consul at Folkoperan in Stockholm in 2009. Before that, he had worked for ten years as a rock singer, vocal coach, music and drama teacher. The Nordic opera world became quickly aware of this charismatic performer and his powerful and wide ranged voice, and the debut was followed by selected baritone roles at Folkoperan in Stockholm, but also at other venues such as Läckö Castle Opera.

In spring 2010 Daniel Frank sang the part of Severin in Kurt Weill’s Silver Lake which successfully established his change from the baritone to the tenor repertoire. After that, Folkoperan engaged him as Valentin in Gounod’s Faust, and since then Daniel has left the baritone repertoire behind and is solely focusing on tenor roles.

Daniel has won several prizes, a. o. an award from the Friends of the Folkoperan “…for his performance in Pearl Fishers (Nourabad) and Silver Lake (Severin), two diametrically opposed sets and works, where Daniel Frank demonstrated a powerful range of singing and acting,” and Uppsala Municipality Cultural order “… for his mature vocal art and theatrical portrayals on the opera stage, not least in the past performances “Pearl Fishers” and “Silver Lake” at Stockholm’s Folkoperan.” Daniel Frank received the Birgit Nilsson’s scolarship 2012.

In the summer of 2011 Daniel was back at Läckö Castle Opera where he sang Peter Quint in Britten’s The turn of the screw. In the fall of 2011, Daniel made his successful debut at the Malmö Opera as Laca in Janacek’s Jenůfa. In the spring of 2012 he sang his first Don José at the Norrlandsoperans new production of Carmen.

In spring of 2013 Daniel Frank sang the title role in Tannhäuser at Deutsche Oper am Rhein in Düsseldorf as well as Tamino in The Magic flute at the Malmö opera. Later that summer he sang Tannhäuser in Colombia with Gustavo Dudamel. Daniel also made a appreciated appearance as Lacain Jenůfa at Theater Kiel as well as receiving Operavännernas Brodin scholarship.

2014 included another Tannhäuser. This time at the Royal opera in Stockholm. Also a debut as Peter Grimes at Konzert theater in Bern and his first Florestan in Fidelio at Wermland opera in Karlstad. Awards this year was The Opera Soloist’s Set Svanholm scolarship and (Swedish) OPERA Magazine’s Opera Award.

In 2015 Daniel Frank sang his first Radames in Aida at Malmö Opera whilst he kept on singing Florestan in Fidelio at Wermland Opera and sang in a revival of the Prague Tannhäuser production. He was also contracted as Jonas Kaufmann’s cover in Fidelio at Salzburger Festspiele during the summer. In the autum he sang his first Lohengrin at Konzert Theater Bern.

2016 had many exciting new experiences for Daniel Frank. He continued to sing Lohengrin in Bern but also sang his first Paul in Die Tote Stadt at Wermland Opera along with Mahler’s eighth symphony.

In 2017 Daniel Frank sang yet another production of Tannhäuser and also Florestan in Fidelio in Weimar. Later that year came his first Ring cycle as Siegfried in Götterdämmerung in Karlsruhe’s new Ring.

2018 had more Götterdämmerung performances in Karlsruhe but also a debut as Bacchus in Ariadne auf Naxos at Göteborgsoperan. The next debut came in another part in Wagner’s Ring cycle. This time as Siegmund in Deutsche oper am Rhein’s Die Walküre. More to come this year is Tannhäuserat Oper Leipzig, Paul in Die Tote stadt at Nederlendse Reisopera and Florestan in Fidelio at Narodni Divadlo in Prague.

2019 will include part like Bacchus in Ariadne auf Naxos at Deutsche oper am Rhein in Düsseldorf, Paul in Die Tote Stadt at Nederlandse Reisopera, Florestan in Fidelio at Narodni Divadlo in Prague, Tristan in Tristan und Isolde at Konzert Theater Bern, Tannhäuser in Tannhäuser with Leipzig Oper at the Hong Kong Arts Festival and Florestan in Fidelio at Teatro Comunale Di Bologna.