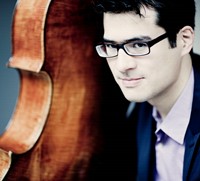 The son of a German-Japanese family born in 1979 in Bonn, received his first cello lessons at the age of four. After completing studies with Hans Christian Schweiker, he spent time in the United States studying at Indiana University. Boris Pergamenschikov, with whom he studied at the Hanns Eisler Conservatory in Berlin from 1998 until 2004, has been a fundamental influence on him, both artistically and personally. From 2004 to 2006, he studied at the Conservatory with Tabea Zimmermann. He has also been strongly influenced by Bernhard Greenhouse, Michael Denhoff, György Kurtág, Menahem Pressler and the Amadeus-Quartet.

After previously winning 1st prizes at the 1998 international Gaspar Cassado Cello Competition in Spain and the 1999 International Lutoslawski Cello Competition in Warsaw, Danjulo Ishizaka won the 1st prize at the renowned ARD international music competition in Munich, Germany in 2001. In 2002, he claimed the Grand Prix Emanuel Feuermann of the Kronberg Academy and the Universität der Künste in Berlin – this competition, under the patronage of Daniel Barenboim, was created in honor of the 100th anniversary of the birth of the legendary cellist, Emanuel Feuermann.

Danjulo Ishizaka was chosen for BBC Radio 3’s renowned “New Generation Artists scheme,” providing him with the opportunity to make numerous studio recordings in 2007 and 2008 – solo, with piano and with the five BBC Symphony Orchestras – as well as debut recitals at Wigmore Hall London.

During the upcoming 2013/14 season Danjulo Ishizaka is going to debut – alongside several re-invites – with the Radio Symphony Orchestra Vienna with Krzysztof Penderecki and the Asia Philharmonic Orchestra with Myung-Whun Chung as well as at the Haydn Festspiele with the Budapest Festival Orchestra and Adam Fischer.

In 2011 Danjulo Ishizaka was appointed to a professorship for cello at the Carl Maria von Weber University of Music in Dresden.

At the end of 2012 Danjulo Ishizaka was honored with the Hideo Saito Memorial Fund Award, one of Japan’s biggest music awards, awarded by the Sony Music Foundation in Tokyo.

Danjulo Ishizaka performs on the Wolfgang Schnabl cello, formerly played by Boris Pergamenschikov and provided by the Kronberg Academy, as well as the 1696 Stradivarius Cello “Lord Aylesford”, previously played by Gregor Piatigorsky and Janos Starker, on loan to him from the Nippon Music Foundation.