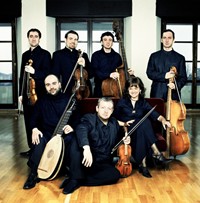 Europa Galante has performed in many of the world’s major concert halls and theatres including  La Scala in Milan, Accademia di Santa Cecilia in Rome, Suntory Hall in Tokyo, Concertgebouw in Amsterdam, Royal Albert Hall in London, Musikverein in Vienna, Lincoln Center in New York and the Sydney Opera House. The ensemble has toured throughout Australia, Japan, Canada, Israel, USA and South America.

Europa Galante’s repertoire includes the works of Handel (Agrippina) and Vivaldi (Bazajet), and many instrumental works right up to the eighteenth Century. They have shown a great interest in the works of A.Scarlatti such as the oratorios (Maddalena, La Santissima Trinità), Seneratas (Clori, Dorino e Amore) and operas such as Massimo Puppieno, Il Trionfo dell’Onore, La Principessa Fedele and Carlo Re d’Allemagna.

In 1998, after years of collaboration with the French record company Opus 111, Europa Galante signed a contract with Virgin Classics to record Vivaldi’s Four Seasons and 2 volumes of Luigi Boccherini’s string quintets as well as arias from cantatas by J.S. Bach with Ian Bostridge. The ensemble has been nominated twice for Grammy Awards – in 2004 for its disc of Vivaldi’s Concerti con molti strumenti and in 2006 for its recording of Vivaldi’s Bajazet. The most recent release, Vivaldi arias with Vivica Genaux, has been awarded at the Echo Classics. Their next recording projects include a Vivaldi compilation “La Stravaganza “, and Vivaldi’s Ercole sul Termodonte, with an amazing cast (Genaux, di Donato, Damrau, Lehtipuu and Basso).

In 2010 Europa Galante had a long tour in Sweden and also performed in Italy, France, Spain, Germany, and Poland with an instrumental repertoire, which included Bach’s Orchestral suites. Their vocal works include the Ariosti’s Opera “La Fede nei Tradimenti” which will tour in Festivals like Vienna, Siena and Montpellier, Handel’s Agrippina at the Halle Festival.

Europa Galante has lately been on tour in Europe, Asia, and in the U.S. – presenting a program with Vivica Genaux- and instrumental programs including “La Foresta Incantata” of F.Geminiani.

Europa Galante is the resident orchestra of Fondazione Teatro Due in Parma.