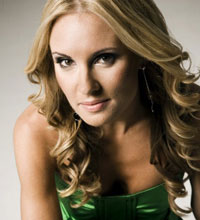 Hannah Holgersson has established herself as one of Sweden’s most versatile singers, with a repertoire that extends from baroque music by way of opera to the most recent avant-garde music. Hannah studied at the Royal College of Music in Stockholm, Sweden, receiving diplomas in voice performance and pedagogy.

As a soloist, Hannah appears regularly with such groups as the Royal Stockholm Philharmonic Orchestra, the Royal Stockholm Opera Orchestra, Rebaroque (Maria Lindal), the Drottningholm Baroque Ensemble and regularly with both the International Percussion Ensemble Kroumata and the Eric Ericson Chamber Choir. Hannah has worked with such conductors as Esa-Pekka Salonen, Alan Gilbert, Sakari Oramo, Lawrence Renes, John Adams and Tan Dun. She has taken part as soloist in several CD recordings and gives regular radio and TV performances. Among her international engagements we find Hannah’s American classical concert début 2009, taking the notoriously difficult soprano part in György Ligeti’s Requiem, together with the San Francisco Symphony Orchestra under Sir Michael Tilson Thomas.

Among rcent and upcoming engagements to be mentioned are New Years concerts with the Dalasinfonietta, Hillborg’s Lontana in Sonno with Norddeutscher Rundfunk in Hamburg as well as the BBC Symphony Orchestra and Hillborg’s Sirens with at the BBC Proms.