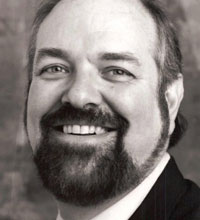 James Moellenhoff’s musical versatility is evident in his varied concert repertoire, which includes, among others, Haydn’s Creation, Händel’s Messiah, Rossini’s Stabat Mater, Beethoven’s Missa Solemnis, the “Matthäuspassion” of Bach and the Requiems of Mozart and Verdi.

Mr. Moellenhoff received his first musical training in voice and trumpet in his hometown of St. Louis, Missouri. He later completed a Bachelor of Music degree at Southwest Missouri State University before earning his Master of Music at the University of Texas at Austin. He currently resides in Leipzig, Germany, where he is a member of the ensemble at the opera.

Among recent and upcoming engagements we find König Marke in Tristan und Isolde in concert with the Montreal Symphony Orchestra under Kent Nagano, Hagen in Götterdämmerung at the Royal Opera in Stockholm as well as for The Royal Opera House Covent Garden and Fafner in Siegfried for De Vlaamse Opera.