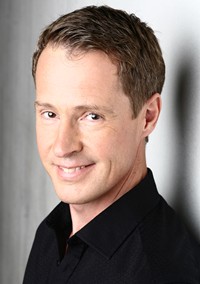 Since graduating from the Royal University College of Music in Stockholm, the Swedish tenor Johan Christensson has established himself as one of the leading lyric tenors in the field of baroque and contemporary music. He has developed into an opera artist, acclaimed for his charisma and temperament and experienced from stages both in Sweden and abroad. Apart from roles in Mozart and baroque operas, he performed French haute-contre roles and has repeatedly been invited to participate in world premiers of contemporary operas. As a concert singer he masters most of the baroque and classical repertoire with a special interest in interpreting the evangelist parts in the baroque passions.

Johan Christensson has had the title role in Lully’s Phaëton at the Staatstheater in Saarbrücken , the roles of Mercure and Suivant de l’amour in Rameau’s Hippolite et Aricie at the Théâtre du Capitole in Toulouse, where he also had the role of Kurt in the World premiere of Philippe Fenelon’s opera Faust, later replayed at the Opéra National de Paris. At the Drottningholm Court Theater he had the role of Iro in Il ritorno d’Ulisse in Patria as well as Nutrice and Fortuna in L’incoronazione di Poppea by Monteverdi. At Folkoperan in Stockholm he had the role of Belmonte in The abduction from the Seraglio and also Ferrando in Così fan tutte. At the Piteå Chamber Opera Johan was praised for his interpretation of King Gustaf III in Jan Sandström’s opera God Natt Madame. With the same company he also performed the Electrician in Thomas Adès’ Powder her face and the secretary in Carl Unander-Scharins opera The Crystal Cabinet.

Vital performances as concert singer include Mozart’s Requiem with the Gothenburg Symphony Orchestra conducted by Nicolas McGegan, Handel’s Messiah in Västerås Concert Hall conducted by Roy Goodman, the evangelist part in Bach’s Mathew passion at Teatro Comunale di Bologna conducted by Roberto Polastri, in Laeiz – Musikhalle in Hamburg with Christoph Schoener as well as S:t Johns passion in Die Glocke in Bremen with Joshard Daus. He has also made a China tour with Helmuth Rilling singing works by Bach and he was invited to the Nidaros Cathedral in Norway as Evangelist in Bach’s Christmas Oratorio with Philip Pickett.

Recent opera engagements include Gualtiero in Vivaldi opera Griselda at Teatro Municipal in Rio de Janeiro, The Schoolmaster in Janáček’s The Cunning Little Vixen at Läckö slott Opera and Monseiur Triquet in Eugen Onegin at the NorrlandsOperan in Umea.