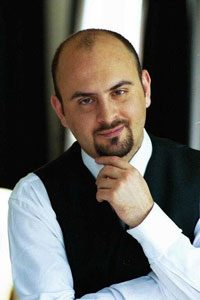 Jonas Durán has participated in many competitions and won first prize in the Jyväskylä International Singing Competition for Tenors in Finland in 2002. He was also a finalist in Madeleine Finden Singing Competition, Clonter Opera Prize and the Gösta Winbergh Award both in 2003 and 2004.

Jonas Durán was born in Las Palmas de Gran Canaria, Spain, but grew up in Sweden. He received his musical education at the Ingesund Music School, the University College of Opera in Gothenburg and the RCM Benjamin Britten International Opera School where he studied with a. o. Madame Vera Rozsa. He has participated in master classes with Donald Maxwell, Philip Langridge, Sir Donald McIntyre, Gerald Finley, Sarah Walker and Eric Tappy.

In spring 2000, Jonas Durán made his operatic debut in the title role of La Clemenza di Tito for Gothenburg Opera School. Other roles include Snout in A Midsummer Night’s Dream (director John Copley), Beppe in I Pagliacci, Rinuccio in Puccini’s Gianni Schicchi, Lensky in Eugene Onegin at Clonter Opera, Monostatos in Die Zauberflöte and Alfred in Die Fledermaus.

As an ensemble member of the Swedish Wermland Opera Jonas sang parts such as Zinovy Borisovich Ismailov in Lady Macbeth of Mtsensk by Dmitri Shostakovich, Don Ottavio (opposite Håkan Hagegård as Don Giovanni), Ferrando in Peter Konwitchsny’s Cosi fan Tutte, Pirelli in Sweeney Todd, Rodolfo in Konwitschny’s production of La Bohème, the Duke in Rigoletto and Turiddu in Cavalleria Rusticana. In spring 2010 hemade his debut at The Royal Swedish Opera singing Macduff in Macbeth, a part he also performed at Malmö opera.
He received great acclaim for his Mimes in Wermland Opera’s Ring.

Among recent and upcoming engagements to be mentioned are Monostatos in the Magic Flute, Guillot de Morfontaine in Massenets Manon, The Witch in Hansel and Gretel and Monsieur Triquet in Eugen Onegin, all at the Malmö Opera, Victorin in Die Tote Stadt at Wermland Opera and Fatty in Rise and Fall of the City of Mahagonny at Norrlandsoperan.