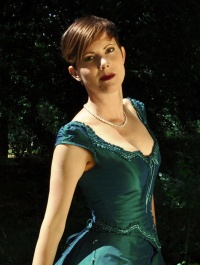 Swedish mezzo soprano Josefine Andersson graduated in spring 2012 at the Copenhagen Opera Academy, where her vocal coach was Kirsten Buhl Möller. Prior to her admission she conducted preparatory studies at the Royal Danish Music Conservatory. She has taken part in master classes with, amongst others, Dorothy Irving, Martin Isepp, Mikael Eliasen, Hans Peter Blochwitz, Felicity Palmer and Helmut Deutsch.

In her first term at the Opera Academy, she was already cast as Dryade in the Royal Danish Opera’s production of Ariadne auf Naxosand the year after she was engaged to sing the Kunstgewerberin in Lulu. Her next assignment with the Royal Danish Opera was in spring 2011 as Stéphano in Gounod’s Roméo et Juliette. As a student of the Opera Academy she had the opportunity to work with prominent artists, such as conductors Freidemann Layer, Michael Boder, Marc Soustrot and Alexander Shelley and directors Robert Carsen, Stefan Herheim and Olivier Py.

Josefine Andersson is an accomplished performer of Lieder and art songs and is steadily building an impressive concert repertoire. Last year she won two prizes at the Sibelius singing competition in Järvenpää in Finland. She was selected to take part in the 14th Académie européenne de musique taking place in summer 2011 under the auspices of the opera festival in Aix-en-Provence after which she sang her first Angelina in Rossini’s La Cenerentolawith Øresundsoperan on tour in Sweden and Denmark. In February 2012 she made her debut at Stockholm’s Folkoperan as Sesto in Handel’s Julius Caesar.

Josefine Andersson has been awarded numerous awards and scholarships, for example from the Swedish Royal Academy of Music and the The Royal Danish Conservatory of Music, and she won the Jenny Lind prize 2012 which will take her on a summer concert tour through the United States and Sweden.

Among recent and upcoming engagements are the title role in La Cenerentola in Denmark and Hermia in a Midsummernight’s dream at Läckö Castle Opera and Mercedes in Trondheim Symphony Orchestra’s new production of Carmen.