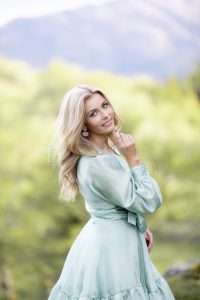 Soprano Lydia Hoen Tjore (27) is one of Norway’s most promising and exciting young opera talents. She graduated from The Royal Opera Academy at The Royal Danish Opera as one of the youngest in the history of the academy. From August 2018 until June 2020, she was a part of the soloist ensemble at The Norwegian National Opera & Ballett as a young artist. There, Lydia made her debut as Zerlina in DON GIOVANNI. Other roles with The Norwegian National Opera & Ballett includes Suor Genovieffa in SUOR ANGELICA, Belinda in DIDO AND AENEAS and 1. Dame in THE MAGIC FLUTE, Adina in L’ELISIR D’AMORE and Micaëla in CARMEN.

Despite her young age, Lydia is already an experienced soloist, both in concert and opera. She has performed Susanna LE NOZZE DI FIGARO(2016), Despina COSI FAN TUTTE(2015), Donna Elvira DON GIOVANNI(2014) in stage productions at the Narnia Festival in Umbria, Italy. She has also sung Barbarina LE NOZZE DI FIGARO at the Tuscia Operafestival in 2010.

Lydia Hoen Tjore is recognised for her solid stage performances and good contact with the audience. She has participated in a wide range of concerts with professional ensembles and orchestras both in Norway and abroad. She has worked with orchestras such as The Norwegian Radio Orchestra (KORK), Bergen Philharmonic Oorchestra, The Norwegian National Opera Orchestra and Wermland Opera Orchestra, and conductors such as Enrique Mazzola, James Gaffigan, Jac van Steen, Markus Lehtinen and Daniele Callegari to name a few.
Recently, Lydia was a finalist in The Queen Sonja International Music Competition as the only singer from Scandinavia, and also won the Ingrid Bjoner Prize. Lydia has also won competitions for young singers such as the Nina Grieg International Solo Competition in 2016. In 2006, 2008, 2010 and 2012 Lydia won her class in the National Young Artists Championship of Norway (UMM). In 2014 she played the role as Solveig in Peer Gynt with Bergen Philharmonic Orchestra. She gave a solo concert at the home of Ole Bull during Bergen International Festival (Festspillene i Bergen) in 2014. She has performed for the Danish Royal Family, and the Norwegian Royal Family several times, once in the royal castle in Oslo. Among other TV performances she was one out of two young singers who was portrayed in a tv-series on NRK called Masterclass in 2013.

Lydia is from Radøy island, north of Bergen, Norway. There, she studied voice, piano and cornet at the music school from a very young age. Her first vocal teacher was her mother, Ann Christin Hoen. When she turned 13, she was accepted into the Grieg Academy’s talent program in Bergen with opera singer Hilde Haraldsen Sveen as her teacher. Lydia began her studies at The Royal Danish Music Academy at 17 with prof. Susanna Eken, and finished her bachelor studies in 2015 and her master studies in 2016, both with the highest exam score. She graduated from The Royal Opera Academy in Copenhagen in the summer of 2018, and was a young artist with The Norwegian National Opera & Ballett from august 2018 until June 2020.