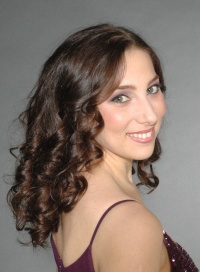 Maria Fontosh studied at the Royal Academy of Music and the University College of Opera in Stockholm. In 2001 she appeared at the Royal Swedish Opera in Stockholm in the role of Rosina in Il Barbiere di Siviglia. Since then she has appeared in roles like Musetta and Mimì in La Bohème, Fiordiligi in Così fan tutte, Zerlina in Don Giovanni, Marie in Die Verkaufte Braut, Marzelline in Fidelio, Marguerite in Faust, Antonia in Les Contes d’Hoffman, Violetta in La traviata, Tatyana in Eugene Onegin and Contessa in Le Nozze di Figaro in venues like the Royal Swedish Opera, Malmö Opera, Oper Frankfurt, Opéra National de Paris, Palau de les Arts in Valencia, Teatro Nacional de Sao Carlos in Lisbon and Semper Opera, Dresden. Recently she has sung Desdemona in Otello at NorrlandsOperan and Micaela in Carmen in Stockholm.

On the concert platform Maria Fontosh has sung Liù in Berio’s new version of act III of Turandot with the Royal Concertgebouw Orchestra and Riccardo Chailly at the Canary Islands (released on CD by DECCA), Szymanowski’s Stabat Mater in Monte Carlo, Haydn’s Die Schöpfung in Stockholm, the role of Parasha in Stravinsky’s Mavra with Gothenburg Symphony and Peter Eötvös and Sifare in Mozart’s Mitridate with the Danish Radio Sinfonietta and Adam Fisher in Copenhagen and Mannheim (released on CD). She has appeared with the Royal Stockholm Philharmonic Orchestra in Mahler’s Symphony no 4 under the baton of Carlo Rizzi and in Nystroem’s Sinfonia del Mare with Alan Gilbert. She has sung Chausson’s Poème de l’amour et de la mer with the Swedish Radio Symphony Orchestra and Evgenij Svetlanov as well as with the Frankfurt Radio Symphony Orchestra.

Maria Fontosh was born in Ukraine and grown up in Russia. She made her debut in 1999 in two intermezzi by Niccolo Jomelli at the Vadstena Academy.  In 2002 she was awarded the 3rd price in the Plácido Domingo competition Operalia in Paris.