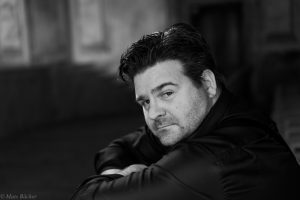 Swedish tenor Michael Weinius, born and raised in Stockholm, has rapidly established himself as one of Scandinavia’s most sought after and praised tenors. His musical training began as a baritone at the well-known Adolf Fredrik’s School of Music and was completed in 1995 with his examination from the University College of Opera in Stockholm.

Michael made his professional stage debut in 1993 as Guglielmo in Così fan Tutte and he has since then been a regular guest at all the major opera houses in Sweden singing roles like Renato in Un ballo in Maschera, Posa in Don Carlo and Marcello in La Bohème. In contemporary opera Michael Weinius has also performed several roles especially written for him, like Cry Wolf by Hans Gefors and Jeppe by Sven David Sandström. In addition to his operatic career, Michael Weinius regularly sings lieder recitals as well as orchestral concerts. He has performed in Denmark, Norway, Austria, Spain, Great Britain, France, Belgium and the USA.

In 2004 Michael Weinius made his transition from baritone to tenor and immediately had tremendous success as Laça in Jenufa at The Norrland Opera in Sweden. In 2005 he sang Don José in Carmen in concert with the Stockholm Royal Philharmonic Orchestra under Marc Soustrot, Loge in Das Rheingold with Gothenburg Symphony Orchestra under Kent Nagano and Sergej in Lady Macbeth from Mtsensk at Värmlandsoperan in Karlstad.

Further recent and future engagements include Parsifal for Deutsche Oper am Rhein in Düsseldorf and the Finnish National Opera, and Siegmund for De Nationale Reisoper and for Nationaltheater Mannheim, Hans Schwalb in Mathis der Maler at Opera de Bastille in Paris conducted by Christoph Eschenbach and Don José and Lohengrin in Stockholm. In 2013 he will make his debut at the Bayerische Staatsoper in Munich as Parsifal.