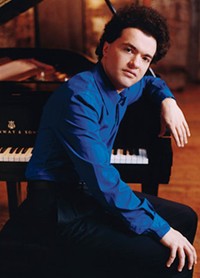 Evgeny Kissin was born in Moscow in October 1971 and began to play by ear and improvise on the piano at the age of two. At six years old he entered the Moscow Gnessin School of Music where he was a student of Anna Pavlovna Kantor, who has remained his only teacher. He came to international attention in March 1984 when, at the age of twelve, he performed Chopin’s Piano Concertos in the Great Hall of the Moscow Conservatory with the Moscow State Philharmonic under Dmitri Kitaenko.

Since Mr. Kissin’s first appearances outside Russia in 1985, he has played with all of the leading orchestras and conductors and in recital in all of the world’s greatest halls. During the 2007-08 season, Mr. Kissin embarked on several major recording projects for EMI Classics. He recorded all five Beethoven concertos with the London Symphony Orchestra and Sir Colin Davis, Prokofiev’s 2nd and 3rd concertos with Vladimir Ashkenazy and The Philharmonia Orchestra, both Brahm’s piano concertos with James Levine and the Boston Symphony and Mozart piano concerti Nos 20 and 27 with the Kremerata Balitica without conductor.

In 1992, Mr. Kissin performed on the Grammy Awards, broadcast live to an audience estimated at over one billion, and in 1995 he became Musical America’s youngest Instrumentalist of the Year. In 1997 Kissin received the prestigious Triumph Award for his outstanding contribution to Russia’s culture – again, the youngest-ever awardee. He was the first musician to give a solo recital at the BBC Promenade Concerts (1997), and the first concerto soloist to be invited to play in the Proms opening concert (2000). In May 2001, Kissin was awarded an Honorary Doctorate of Music by the Manhattan School of Music. In December 2003 in Moscow, he received the Shostakovich Award, one of Russia’s highest musical honours. In 2005, he was awarded an Honorary Membership of the Royal Academy of Music in London and the Herbert von Karajan Music Prize.

Kissin’s musicality, the depth and poetic quality of his interpretations, and his extraordinary virtuosity have placed him at the forefront of the world’s new generation of young pianists. He is in demand the world over, and has appeared with many great conductors, including Abbado, Ashkenazy, Barenboim, Dohnanyi, Giulini, Levine, Maazel, Muti, Ozawa, Svetlanov and Temirkanov, as well as all the world’s major orchestras. He makes regular recital tours to the United States, Japan and throughout Europe.

Mr. Kissin’s recordings have received numerous awards, including a Grammy, the Edison Klassiek, the Diapason d’Or and the Grand Prix of La Nouvelle Academie du Disque.