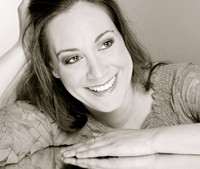 Swedish soprano Karolina Andersson graduated from the Academy of Music and Drama at the Gothenburg University in 2007 and was immediately engaged to join the ensemble at Komische oper Berlin. She went freelance in 2009, but has since returned to Komische Oper for a.o. Gilda in Rigoletto and Queen of the Night in The Magic Flute.

Queen of the Night has become somewhat of Karolina’s signature role and she has performed it e.g. at The Royal Swedish Opera in Stockholm, The Gothenburg Opera, Volksoper Wien, Staatstheater Kassel, Åbo Music Festival and on tour in China with Komische Oper Berlin.

Among other roles to be mentioned are Violetta in La Traviata, Susanna in Le Nozze di Figaro, Blonde in Die Enführung aus dem Serail, Ninetta in Rossini’s La gazza ladra, Governess in The Turn of the Screw by Britten, Miss Wordsworth in Britten’s Albert Herring and La Stonatrilla in L’opera seria by F. L. Gassmann.

Among recent engagements to be mentioned are Carlotta in The Phantom of the Opera both at Cirkus in Stockhom and Gothenburg Opera, Queen of the Night again at Komische Oper Berlin and Royal Swedish Opera as well as Åbo Music Festival,

In 2019/2020 Karolina will be doing Queen of the Night at Gothenburg City Theater and Gefährtin at Konzrttheater Bern.

Karolina has a vast concert repertoir and is sought after as a concert soloist  e.g. she has participated in the Swedish Radio Symphony Orchestra’s yearly Epiphany concert broadcast by the Swedish Television.

On CD Karolina can be heard as Signe in Stenhammar’s Gillet på Solhaug (Sterling).